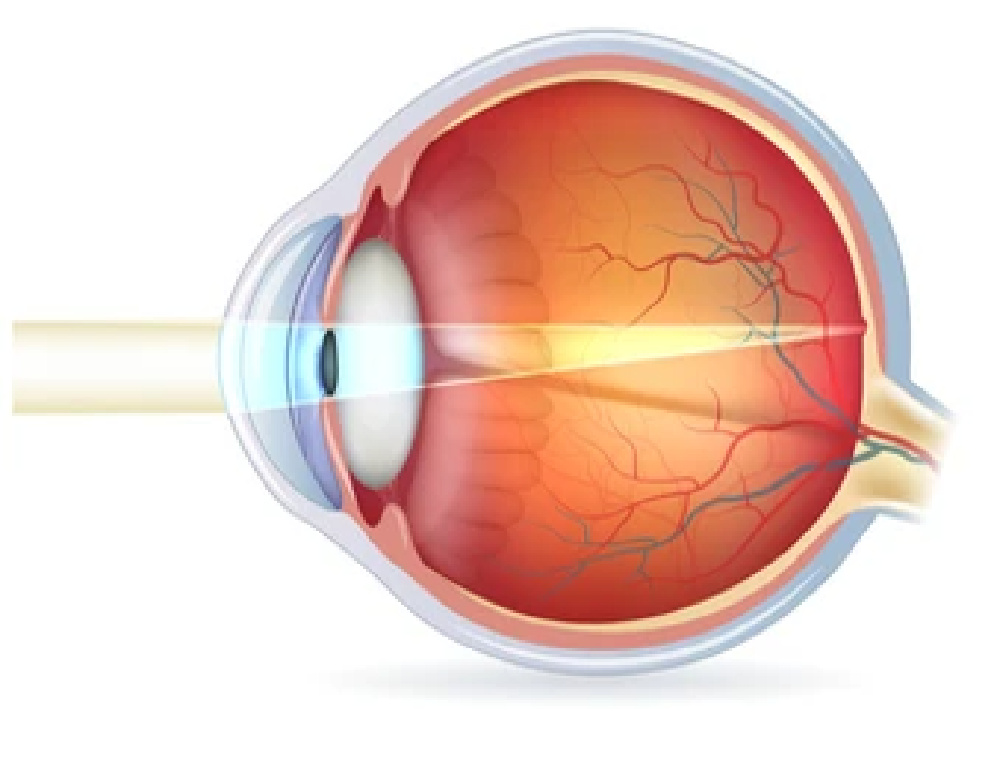 While vitrectomy can save a patient’s vision, there may be a sinister side to it. Ultraviolet (UV) light may cause damage to the eyes, particularly to the cornea and the lens. And the cumulative effects of UV exposure can cause cataracts.

A Case of The Blues

Blue light reaches even deeper into the eye, and its cumulative effects can cause damage to the retina. Harmful UV and infrared radiation (IR) rays are usually filtered by the cornea and lens of the eye, but this natural protective barrier is bypassed during endoillumination for vitrectomies. Furthermore, blue light damage can destroy cells in the retinal pigment epithelium (RPE), also known as phototoxicity. The irradiation causes oxidative stress on the photoreceptors in the RPE1, in which oxygen radicals (ROS) can form due to the photochemical processes.

This ultimately results in increased cell death and encourages the development of other pathologies, such as age-related macular degeneration (AMD), a leading cause of blindness that affects more than 30% of people over 75 years of age. The pathogenesis of AMD usually advances with retinal photic injury caused by excessive light exposure and consequent oxidative stress. Numerous studies confirm that cumulative lifetime exposure to blue light causes photo-oxidation of retinal cells that leads to AMD. Studies show that high-energy, visible wavelengths of 415 nm to 455 nm have the highest potential for oxidative stress on the RPE.

Moreover, other factors affecting the degree of phototoxicity include intensity and exposure duration of the irradiation, as well as the size and type of the endoilluminator. In addition, the distance to the retina can also be a factor.

The absolute power and spectral distribution from various light sources and ﬁlter combinations that are commercially available for vitreous surgery were measured. The maximal exposure times based on the International Commission on Non-Ionizing Radiation Protection (ICNIRP) safety guidelines for photochemical and thermal injury of the aphakic eye were calculated. The results showed measurements of the spectrum and energy indicated that the ICNIRP safety guidelines for photochemical retinal damage are exceeded within one minute for nine out of 10 combinations tested.

With an additional 475 nm long pass ﬁlter, light levels below 10 mW, and a distance from the light probe to the retina of at least 10 mm, the allowable exposure time can be increased up to 13 minutes – which is not sufficient for even the average O.R. time of one to several hours of performing a pars plana vitrectomy (PPV). Thermal damage can occur in longer wavelengths (Infrared) or high power outputs with bad design for heat distribution that come too close to the retina. In vitreoretinal surgery, surgeons must ensure there is sufficient illumination for visualization without causing phototoxic exposure. To say the least, this is a tough balancing act.

The American National Standards Institute has advised that photo-exposure should not exceed 10 joules/cm2 with a maximum illumination time of 30 minutes. Many retinal surgeries (ISO 15752:2010 and 15004-2), however, may exceed the allocated time frame, and the light emitting from most endoilluminators goes beyond these guidelines. Some precautions can be taken to minimize the risk of inducing phototoxicity in retinal surgery. For example, employing a shorter surgery time and maintaining a distance from the retina to the light source help lower the potential risk of exposure.

Another option would be to use different wavelengths of light to reduce exposure to blue light wavelengths. Different kinds of light sources can be employed during vitreoretinal surgery, including halogen, xenon, and metal halide. These come with their own set of pros and cons.

One of the latest innovations in light sources involves the use of light-emitting diodes, or LED light. In order to balance the need for optimal illumination while decreasing the potential to induce phototoxicity, one of the advantages of LED endoilluminators is that their wavelengths can be split. This allows the operator to customize the spectral composition of the light.

One of the latest innovations to overcome this problem is by Geuder AG (Heidelberg, Germany). Its SOLEA LED light source for endo-illumination can display up to 16.7 million colors of the visible spectrum. This enables freedom in color composition and visualization of the finest tissue structures at color temperatures of 3,500 – 6,000 K. The operating field is illuminated with a maximum luminous flux of 45 lumens. With the Geuder SOLEA, the phototoxic amount is low because of its integrated retinal protection mode that can deactivate the blue LED, protecting the safety of the patient and allowing for longer illumination times with comparable light intensity.

Additional UV or IR filters are also not required, because of the narrow-band spectrum of the LEDs. The Geuder SOLEA also has the unique function of reducing the phototoxic amount of blue light through additive color mixing of all three primary colors – red, green and blue – to obtain adjacent colors, such as turquoise or purple. Modern narrow-band RGB LEDs prevent harmful radiation in the UV or IR range without requiring extra filters. With the retinal protection mode, Geuder SOLEA can reduce phototoxic effects by fully deactivating the blue LED which has the highest risk for phototoxicity. Its red and green LED can provide enough light as each output provides up to 45 lumens of luminous flux.

In a nutshell, many diagnostic and therapeutic devices in ophthalmology are equipped with a bright light source to illuminate the fundus of the eye, but the light emitted can pose a potential danger to the retina. Short wavelengths in the UV and visible spectrum of the color blue, in certain conditions, can be hazardous, too. In most instances, the light is applied through the eye.

As the lens is a good absorber of blue and UV light, the irradiance threshold for retinal damage is relatively high. During a trans pars plana vitrectomy, however, the ﬁber optic endoillumination bypasses natural barriers, and the threshold for damage by visible radiation to the retina is substantially reduced. Modern light sources like the Geuder SOLEA ensure highest patient safety and user comfort to support the surgeon at any time in controlling this balancing act.

The ICNIRP provides safety guidelines for the illumination of the fundus in both phakic and aphakic subjects. But macular phototoxic damage remains a risk during vitrectomy, even with maximum precautions. The good news, however, is that innovations and technology may be able to combat this phenomenon. Now finally, somebody (Geuder AG) cares about these thresholds that were neglected in the past.

Editor’s Note: A version of this article was first published in PIE magazine issue 23.