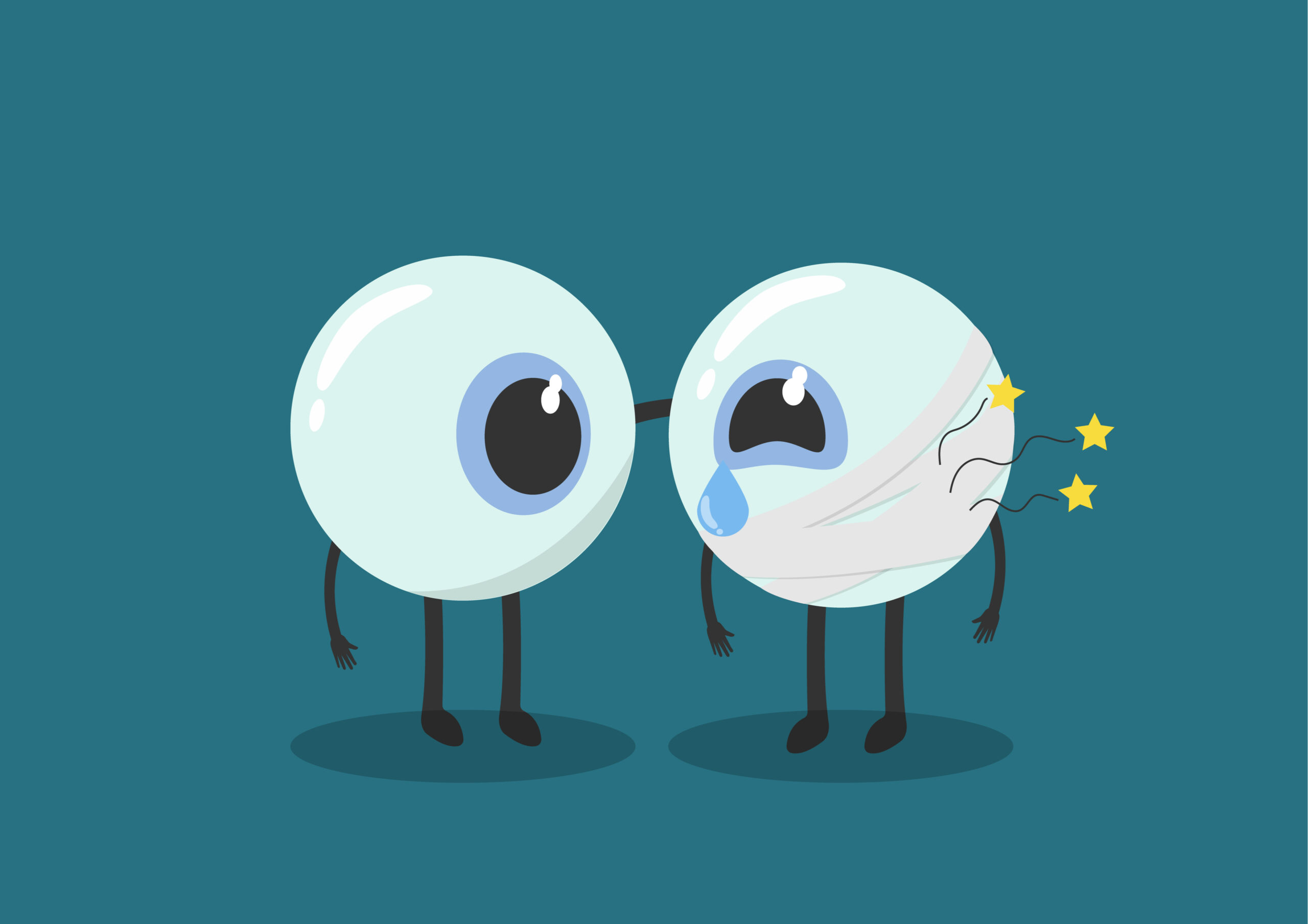 Ocular trauma is nobody’s idea of a good time, but it’s also something most people don’t spend much time thinking about. Considering just how vulnerable our eyes are, it’s a wonder that there aren’t more injuries — though there are plenty, and in many diverse forms.

Ocular trauma (OT from hereon out) was the focus of a talk given by Dr. Rajendra P. Maurya at this year’s All India Ophthalmological Society (AIOS) International Ophthalmic Conclave (IOC), or AIOS IOC 2021. Dr. Maurya is a professor at Banaras Hindu University — and boy, did he take us to school on OT.

As Dr. Maurya noted, OT is the most neglected and under-reported ophthalmic disorder, and is a major cause of acquired visual impairment and blindness. OT represents 7% of all bodily injuries and 10-15% of all eye diseases, and worldwide 1.6 million people are blind due to OT. In India, 1.5% of blindness cases are from OT — and there are plenty more visual impairments on top of that.

However, he also pointed out that 90% of these injuries are avoidable and preventable. In order to create a preventive strategy, doctors and governments need to understand the clinico-epidemiological patterns in OT. Essentially, you need to know just what can happen before you can figure out how to prevent it.

So, Dr. Maurya introduced us to a dizzying, bewildering and morbidly enthralling array of OT cases that occurred in wildly different ways. The result was always OT, but it’s easy to forget just how diverse that T (or trauma) can be.

Before we move into the different categories Dr. Maurya described, let’s reflect on his statement that the people most vulnerable to OT are children. If we don’t place protecting children’s eyes high on our list of priorities … well, what kind of people would we be? Let’s not find out. So, while you’re reading, bear in mind that children are often those most at risk of OT.

On that note, it’s worth mentioning that the majority of children’s eye injuries come from sports and recreational activities. This can include any variety of traditional or modern sports. Dr. Maurya provided one example, for example, of a cricket ball injury that led to a multiple oculo-facial fracture with a globe rupture. If you consider how hard a cricket ball is and how fast it goes, it’s no surprise that it can do some serious damage.

But that’s far from the only ball sport that can hurt an eye. Essentially, any ball game can lead to eye injuries, especially if the ball is heavy and hard.

It doesn’t stop at ball games, of course. Even something seemingly innocuous as kite flying can lead to injuries in two ways. First, the string can cause direct damage to the eye via lacerations; second, the activity can indirectly lead to eye damage during a fall. The images he shared drove home the potential severity of a fall from moderate height.

He provided a framework of low-risk to high-risk sports. Unsurprisingly, activities like swimming, cycling and gymnastics were deemed low-risk; ball games and similar were high-risk; and archery, martial arts, boxing and other combat sports were extremely high risk. This may sound like common sense, but it bears repeating: If you’re getting into a boxing ring or your child wants to learn Kung Fu, recall that OT is a very real possibility.

There’s more, though. Dr. Maurya also provided examples of mobile phone batteries exploding while in use, causing horrific damage to hands and faces — including foreign objects in the eye and missing fingers. He advises not using a phone while it’s charging, avoiding overcharging and regularly checking the quality of the battery.

Just one last example before we move on from how dangerous fun things can be to how dangerous un-fun things can be. You may have noticed how fish hooks are designed to stick in a fish’s mouth, making it easy for you to reel in. Those hooks are also extremely dangerous to eyes, and notoriously difficult to remove after an accident. If you simply try pulling it out, you may do more damage than when the hook entered in the first place. To remove fish hooks, Dr. Maurya recommends three techniques: the retrograde technique, the advance and cut technique, and vertical tissue splitting.

Interestingly — and worryingly — the burden of violence on the world’s healthcare system has nearly doubled in the last 30 years, from 1.3% in 1990 to 2.4% in 2020. Dr. Maurya was quick to note that OT caused by violence was very difficult to prevent — but again, he had no shortage of examples to share. These included blunt force traumas, gunshot wounds and even a bow and arrow eye wound in a tribal person. That particular injury required the combined efforts of a neurosurgeon and an ophthalmologist to repair.

Unsurprisingly, war can lead to, as Dr. Maurya poetically put it, “severe biophysical derangement.” Of course, this shocks no one — but what was shocking were the statistics Dr. Maurya put forward. His statistics, gleaned from highly reputable sources, noted the increasing prevalence of OT in war. The American Civil War (1861-1865) saw OT rates as low as 0.57% of injuries; those statistics steadily increased over the next century to more recent wars like the Arab-Israeli war of 1967, which saw OT rates as high as 10%.

One may wonder if those who suffered OT in earlier wars simply didn’t survive due to worse head protection, and were counted as “killed in action” rather than “wounded.” However, the statistics are there: War is bad for eyes.

Animals injuring people is as old as time itself. However, what’s different now is that most animal injuries come from domesticated animals rather than wild animals. Indeed, Dr. Maurya pointed out that only once in his 25 years of practice had he encountered OT from a bear attack.

Now, to be fair, even if they’re rare, bear attacks are the sort of thing that make people’s ears perk up with alarm. They may even be the reason you clicked on this article. If you live in an area known to have wild bears, knowing how to avoid them can save you from the horrific images Dr. Maurya graciously shared. You really don’t want to look like that.

Much more common than bear attacks, however, are dog attacks. This likely stems from the fact that humans and dogs live in much closer quarters than humans and bears.

Dog bites can be particularly pernicious due to the presence of nasty pathogens in a dog’s mouth combined with the risk of rabies. After extensive treatments, including rabies shots, tissue removal and aggressive saline irrigation, Dr. Maurya pointed out that early primary closure of a wound is highly recommended for better cosmetic results.

OT Caused by Simply Being Alive and Trying to Do Something

Road traffic accidents are naturally a major cause of all sorts of injuries, and OT is no exception. Traffic accidents are a problem in all parts of the world, but injuries are especially notable in developing countries with lax traffic regulation, inadequate road maintenance and underdeveloped driving skills. One can hope these situations can improve, but strong government action like that seen in western countries can help reduce OT and other injuries.

Dr. Maurya noted domestic chores like cooking and essentially anything in the agricultural sector can lead to eye injuries. At this point in the talk, the audience had largely gotten his point: OT can happen pretty much anywhere to anyone, and we all need to be careful and take it seriously.

With all that information, you may have the inclination to immediately rush to find a pair of protective goggles to wear at all times. That’s not entirely necessary — after all, you’ve likely made it this far without significant OT (touch wood).

What Dr. Maurya suggested, instead, was massive public education and awareness campaigns to help prevent OT. This includes educating the public on problems relating to delayed presentation — i.e., someone thinking their eye is okay when it’s not. That’s extremely common, and people should be encouraged to go to the doctor immediately should they sense they have OT.

As OT is more common in rural, impoverished and underdeveloped areas, the role governments play can be significant indeed. Enforcement of traffic regulations and safety requirements at construction sites, for example, can go a long way to reducing the prevalence of OT. Governments in many countries with lax assault laws can also strengthen those laws to help prevent violently caused OT.

In the event a doctor does need to replace an eye, by the way, Dr. Maurya highly recommends leaving the globe intact if possible, even if there is no vision at all. It helps a patient psychologically, he said.

We’ll never end OT entirely, but we can at least reduce its risk and prevalence. Governments and societies owe it to their members to try their best to protect their eyes. They’re a special part of the body, after all.

Editor’s Note: AIOC IOC 2021 was held virtually on February 19 to 21. Reporting for this story took place during the event.