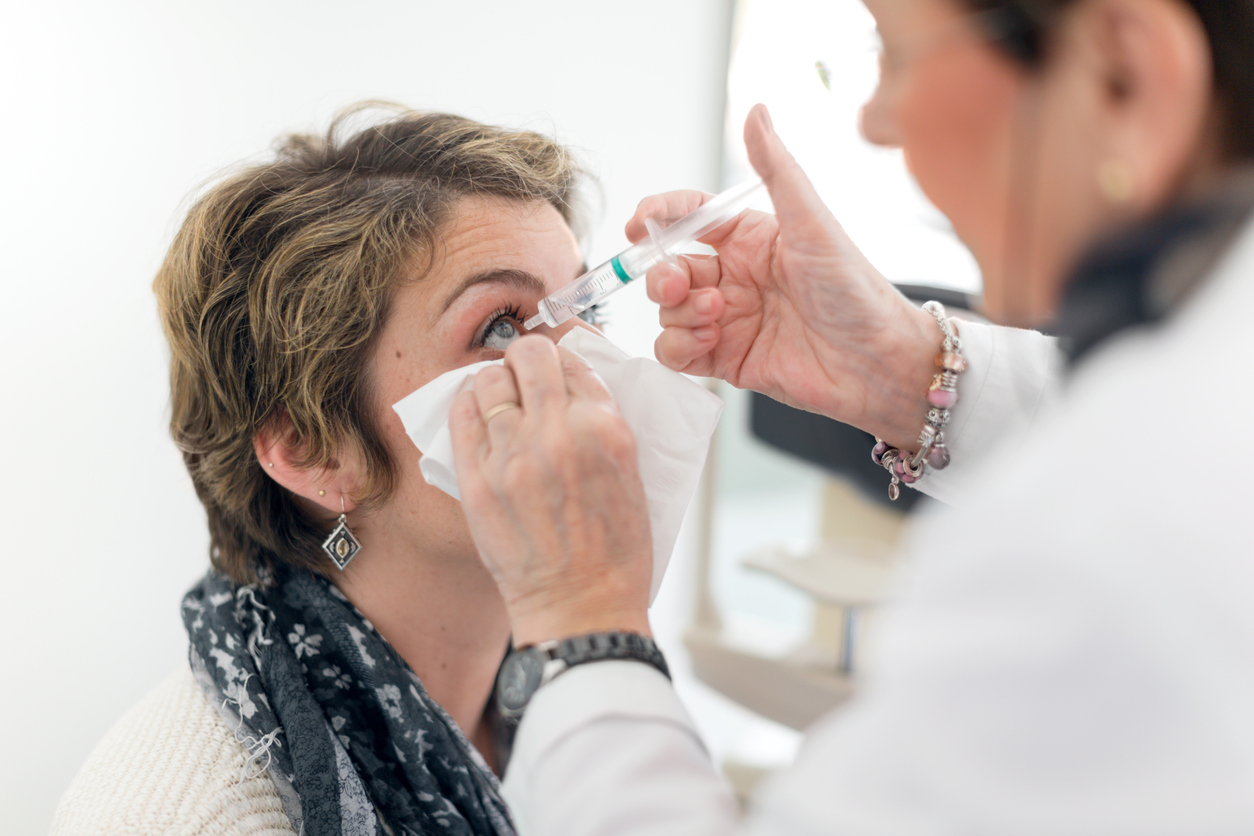 I’m going to go out on a limb here and postulate something, namely, that people aren’t generally keen on getting needles stuck in their eyes. Indeed, I’d say that most people, if given the option, would prefer to go about their business without their eyes being needled. We don’t really hear of people doing this for fun after all (except for some tattoo nuts).

But of course, sometimes you have to do things that you hate for the sake of your health. Eat an apple everyday, get eight hours sleep every night, and take your anti-vascular endothelial growth factor (VEGF) injections if you need them. Everyone agrees on the extraordinary potential of this treatment, but it only works if patients comply.

Intravitreal anti-VEGF injections are used to treat neovascular age-related macular degeneration (nAMD). Also known as wet AMD, the condition is one of the leading causes of blindness and there is no known cure. Anti-VEGF treatment is so promising because it is one of the few treatments that can arrest the development of wet AMD.

Anti-VEGF does have its detractors who often cite a number of factors that prohibit access such as cost. The treatment only stabilizes the patient, which means that injections have to be administered monthly, with bevacizumab costing $55 per dose, and ranibizumab costing up to $2,023 per dose.1 Anti-VEGF is an expensive treatment, a cost only exacerbated by patient non-compliance.

We get it, nobody likes to have needles stuck in their eyes. However, if you do have wet AMD and your physician recommends anti-VEGF, you are far better off buckling down and getting the injections over with. If you fail to adhere to treatment guidelines, and don’t get the number of injections you need, your eyesight will deteriorate and you will be wasting your ophthalmologists’ time.

Non-adherence costs money and diverts sorely needed medical resources from others who need them. This is one reason why a group of researchers from Melbourne, Australia, to Newcastle-upon-Tyne, England, recently released a study titled Non-Adherence or Non-persistence to Intravitreal Injection Therapy for Neovascular Age-related Macular Degeneration: A Mixed-Methods Systematic Review. Led by lead author Dr. Mali Okada at the Royal Victorian Eye and Ear Hospital, Melbourne, the researchers wanted to understand the reasons for non-adherence as it “remains a significant barrier to optimizing real-world outcomes for patients with nAMD.”2

The researchers examined studies that reported factors for non-adherence to anti-VEGF therapy, as well as studies examining strategies to improve non-adherence rates. Trial eligibility and data extraction were conducted according to Cochrane review methods, a systematic review of research in health care and health policy published in the Cochrane Database of Systematic Reviews. Risk of bias was assessed using the Mixed Method Assessment Tool and certainty of evidence evaluated according to the GRADE-CERQual method.

Breaking down the barriers of non-adherence

“We found that rates of both non-adherence and non-persistence to treatment were high, particularly within the first 12 months of treatment onset, however there was a lack of consensus about how these parameters are defined in the literature,” Dr. Okada said.

“We also found a variety of factors contributing to treatment non-adherence including patient factors such as poor response to treatment or poor baseline vision. However, factors could involve all levels, including at the therapy, social/economic and the health care system level,” she said.

Dr. Okada reports that non-persistence occurred early, with up to 50% of patients stopping treatment by 24 months. High rates of non-adherence were similarly reported, occurring in 32 to 95% of patients. She concluded that better awareness is required for patients and clinicians, to understand the root causes of non-adherence and compliance.

The issue has been exacerbated by the impact of the coronavirus pandemic  as access to healthcare has been severely curtailed in many locations. Indeed, Dr. Okada reports that clinicians are having to adapt by reducing the use of OCT imaging, or by altering their injection regimen strategies. Based on her research, the doctor believes governments could play a role in improving anti-VEGF compliance.

“Social or health system factors were identified as barriers to access to treatment in our systematic review. In particular, lack of transport or further distance to the clinic was reported as a potential disincentive to treatment,” Dr. Okada said.

“Governments can respond to this by providing free transport, whilst other studies have looked at setting up telehealth or satellite clinics with local monitoring to improve access,” she said.

“Economic barriers may also be modifiable by governments, as financial costs, both direct and indirect, were potential issues for some patients,” she added.