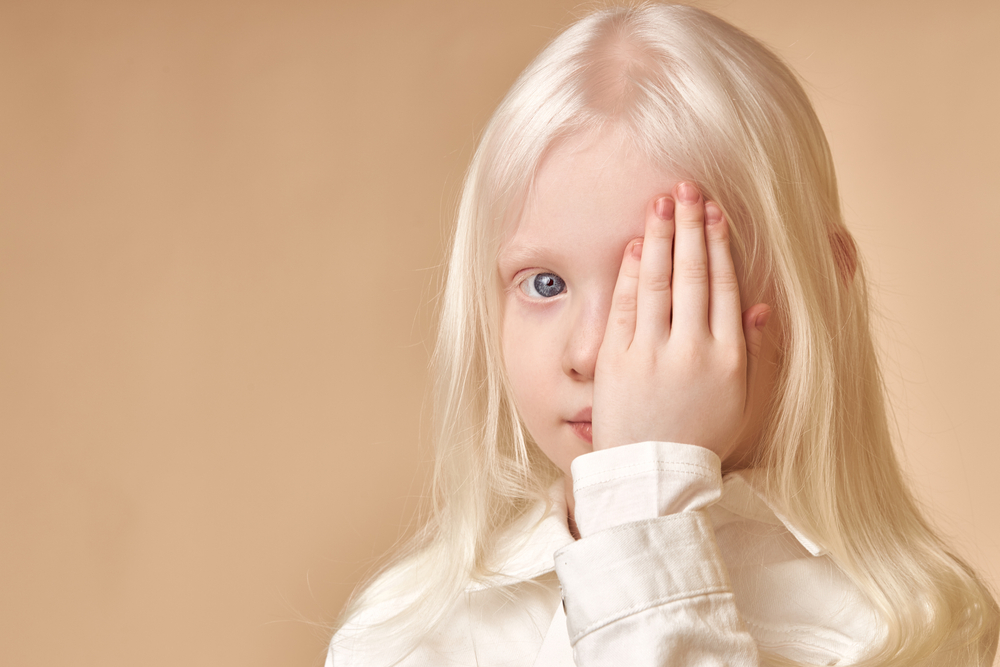 The first ever human-derived stem cell model for studying oculocutaneous albinism (OCA) type 1 and 2 has been developed — and this breakthrough paves the way toward more studies to develop potential therapeutics to treat the condition.1

Using patient-derived induced pluripotent stem cells (iPSCs), researchers from the National Eye Institute (NEI) generated a “disease in a dish” model to investigate how defects in the eye’s pigmentation might affect the structure and functionality of the RPE.

OCA1A and OCA2, caused by mutations in the tyrosinase protein (TYR) and P GENE/OCA2 genes respectively, are the two most common and severe forms of OCA forms in North America.

Affected individuals show different levels, from having none to little pigmentation, which increases their risk for skin cancers and negatively affects their visual acuity.2 There is no available treatment for all forms (8 subtypes) of OCA, which is one of the oldest genetic conditions around.

Thus, patient-derived iPSC lines can be a reliable source of human tissue that would otherwise be difficult to come by.

The Link to the RPE

The genes linked to OCA are expressed at low levels in the neural retina during development and adulthood, but are substantially expressed within the retinal pigment epithelium (RPE).3

The RPE of individuals with OCA lack pigments and suffer from defects in their foveal development which leads to reduced visual acuity, especially in the area of their central vision. However, there has been no degenerative effects seen in the RPE of OCA patients, despite the role of melanosomes which are melanin-containing organelles responsible for the pigmentation of mammalian hair and skin.4

Thus, the researchers wanted to study the abnormalities during the genesis of melanosomes and melanins in the RPE of patients with OCA as they think the RPE plays a crucial role during the formation of the melanosomes.

In this study, the cells were taken from normal subjects as well as from patients with OCA1A and OCA2 and they were then reprogrammed into iPSCs. These stem cells are further differentiated to generate RPE (iRPE) monolayer cells.

The researchers’ strategy for differentiating the RPE cells is unique as other protocols that have been recorded have used the embryoid  body differentiation method to get the RPE from embryonic stem cells.5  Instead, they used a monolayer method which resulted in the obtaining of the RPE cells 40 days later, a timeframe in line with human fetal RPE cell development.

Subsequently, they found that iRPE cells obtained from OCA patients (OCA-iRPE) accurately reproduced the pigmentation phenotype seen in OCA patients’ eyes while keeping normal morphological traits. Furthermore, as RPE-stem-cell-derived RPE have been shown to preserve vision in a rat model of RPE cell dysfunction,6 the researchers argued for the usefulness of stem-cell-derived RPE cells for clinical application.

They also observed that the two types of OCA-iRPE showed increased melanosome degeneration and that there were fewer numbers of matured melanosomes in them. This could be due to the failure of the pre-melanosomes to thrive into maturity or a defect that may have occurred during their biogenesis.

In a study of mice eyes to trace the effect of disrupted pigment formation in the RPE on retinal ganglion cell growth (RGC), the findings implied that a loss of pigment in the RPE impairs RPE cell integrity and communication between the RPE and the neural retina via gap junctions during RGC development.7

Closing the Gap in the Study of Pigmentation Defects?

Similarly, researchers have relied on animal models for insight into albino eyes as they tend to quite fully reproduce the characterization of pigmentation defects. However, the disadvantage is that animals lack fovea. Thus, these studies are deemed unable to to support high-throughput drug discovery studies.

The implication of a human-derived stem-cell model of OCA is that it is not just an effective in vitro model of the disease, but it forms a powerful platform to dive into the research of melanosome biogenesis at the cellular level.

The study also fills a gap as there has not been many human cell lines available for the investigation of melanogenesis and the effects of pigmentation. Thus, the in vitro OCA tissues allow for a better understanding of the formation of melanins at the cellular level, enabling a differentiation of the molecules which could rectify pigmentation defects. This continuous cell source would in turn set the stage for future therapeutics discovery.